I’ve stopped drinking alcohol for about seven weeks now. I never thought I would say this but I actually love it! You all probably read that I stopped for at least one month a year, the last couple of years. I used to hate the sober month, literally counting the days until it was over. So why bother doing it? It was to reset my body and be conscious about my drinking habits. Drinking alcohol is a very social accepted and sometimes demanded thing in the western society. The first thing you get in a restaurant is the wine menu. Also think about the countless network and press events where everybody is drinking alcohol. I noticed that I was giving myself more and more reasons to drink. My drinking habit slowly moved in to finding reasons to drink on every occasion. Don’t get met wrong, I wasn’t an alcoholic or anything. I confess thought that I drank more than one glass of cava every weekend and even occasionally on a weekday.

Why quit just before holiday season?

You’ll probably are wondering why quit just before holiday season. Well if you think like that you’ll never find the right time to stop. I’ve been working out and going to yoga classes for a while now to improve my body and to stay skinny. My ultimate goal is to have a flat tummy. When I was complaining to my gym instructor that I wasn’t getting there, he told me that I had to stop drink alcohol. There is a high percentage of calories in alcohol almost as high as in just plain vet. I couldn’t take the massive hangovers combined with sickening migraines anymore. There is just no space I my busy agenda to stay in bed all day feeling sorry for myself.

How Am I doing so far?

I’ve noticed in the first few weeks after quitting that I slept a whole lot better. I also lost some weight on my tummy. My sleeping rhythm is better because I don’t delay going to bed by drinking alcohol. I just go to bed when I’m tired. I did avoid social events where drinking alcohol is a big part of the fun in the beginning. Luckily I found out a few weeks later that avoiding those events wasn’t necessary. I’m as much fun without alcohol in my body as with. Fear of becoming to tired to dance at night wasn’t true either. Just last weekend I hosted Club Sauvage and danced until four in the morning. Jeej!

Am I less social now?

There is a common fear that not drinking alcohol makes you less social. I think that there are two sides to that. I used to start drinking heavily at party’s where I didn’t like the people that much. Now I just leave early. I find myself doing more what I want. The reasons I used to give myself for drinking alcohol grew to be the reasons not to. Maybe leaving early isn’t that social. On the other hand, now I surround myself with people that fit me better which in turn makes me more social towards them. You shouldn’t have to drink alcohol to have a good time or to be social. I would like to end with a perfect quote by J. M. Bylsma:

Ignorance is a lot like alcohol: the more you have of it, the less you be able to see it’s effect on you… 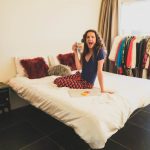 Sometimes life is like a fresh pair of sheetsLifestyle